Note: this post was originally published on Long for Truth March 19. I still believe it is relevant at this time, though most churches are now able to meet.

In the midst of the ongoing Coronavirus or COVID 19 as is being called by experts, some Christians have already begun taking Scripture out of context in defiance of government sanctions to restrict large gatherings. Some of the verses I’ve seen quoted out of context?

Psalm 91:10 No evil shall befall you, Nor shall any plague come near your dwelling

Amos 4:6 “Also I gave you cleanness of teeth in all your cities. And lack of bread in all your places; Yet you have not returned to Me,” Says the Lord.

and my personal favorite…

Hebrews 10:25 not forsaking the assembling of ourselves together, as is the manner of some, but exhorting one another, and so much the more as you see the Day approaching

The latter of the three is the focus of this post. Recently, I saw a Facebook post from a popular apologist quoting Hebrews 10:25 and adding to the end of it something along the lines of, “unless a virus causes you to close church.” The quote is not exact and could not be obtained as the tweet has been removed since then.

Even though the gentleman apologized (though he stated he adamantly stands by his belief) others have taken up the mantle, using this verse to chide and rebuke other Christians for “forsaking the assembling of [themselves]. They have been accused of abandoning God’s Word in favor of fear or man’s mandate. But is that what is really happening? Are Christians who refrain from going to church temporarily forsaking the Word of God? Let’s put this verse in its full context.

Examining the Scripture in Context

Several things need to be noted about how this verse is used to support the said persons’ views of not obeying the government-mandated orders of no large gatherings.

We see two of the occurrences as Jesus’ quote of Psalm 22:1 during his crucifixion. The last four uses indicate the word is used in a bit stronger way, especially in 2Timothy where Paul states that Demas turned his back on him and the work of the gospel for gain. 2Corinthians gives us a picture of God’s faithfulness to Paul by not turning His back on them in times of trouble and persecution. And lastly, we see our passage in Hebrews. Comparing these verses gives us a pretty good idea of what the author had in mind when writing to his Jewish audience. But another interesting thing to note is the usage of this Greek word in the Septuagint, the Greek translation of the Hebrew Bible. This would have been the version familiar to Jesus and His disciples, as much of the world was Hellenized at that time. 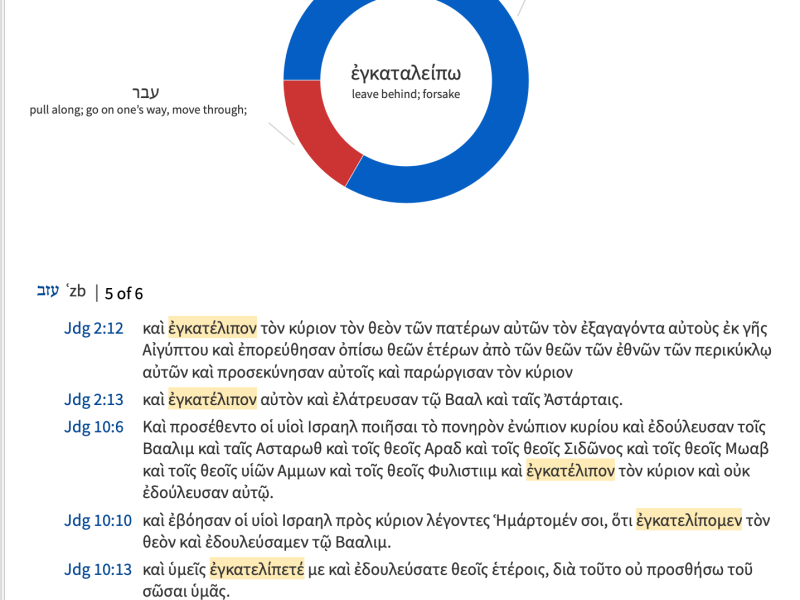 Above we have the Septuagint version along with the English translation below. This Greek word is used in Judges six times, all of them bearing the definition of complete abandonment of faith in the Living God to idols! The word is never used as a mere failure to “meet together” as many of the so-called Facebook theologians would have you to believe.

Those who see themselves as spiritually superior seem to be the real antagonists of this debate. We have clearly seen that the Scripture used to shame people into going to church during the time of this outbreak, Hebrews 10:25, is being misapplied. The meaning of this passage is a complete abandonment of the faith not staying away from church in order to stay healthy or keep from passing a sickness on to someone else. If the government was commanding us to stay away permanently or refusing to let Christians meet simply because we are Christians those “super saints” on Facebook, Twitter, Instagram, and the like may have a cause and a case. But Christian, you are not in sin if your church decides to cancel services due to this illness, or decides to have a live stream in place of services, or even meet together online temporarily until this thing blows over. Those who would hold you to their standards only think of the good of themselves rather than the good of the entire Body.

I Will Heal Their Land – Examining the Context of 2Chronicles 7:14

Fear Not. 10 Biblical Reasons You Can Stop Doubting Your Salvation